CHRISTINA TAYLOR
Florida born, Carolina raised, and living her dream in Nashville, TN! Christina was influenced by artists like Miranda Lambert, and especially Eric Church. They helped her understand that it is artists who are courageously raw and genuinely unapologetically who most inspire us most and what led to picking up guitar and putting pen to paper.

Christina is a CMT Discovery Artist and her video for "Don't Look Good In Your T-Shirt Anymore“ was top 4 video on their count down. Her new single “American Dreamin’”, previous releases "Don't Look Good.." and "That Girl" can be heard on Radio Disney Country, Spotify and other Playlists, including New Boots. Christina was named 2018 artist to watch by AXS.com, thecountrysource.com, countrymusicmin.com, ventsmagazine.com, countrymusicpride.com, cowboysindians.com, celebsecretscountry.com, yourlifeinasong.com, thenashvilleknack.com, and womenofcountrymusic.com. You can catch her performing regularly at the famous Sutler Saloon in Nashville where Christina enjoys a coveted residency.

"Don't Look Good in Your T-shirt Anymore" was a top 60 song on the Music Row Country Breakout Chart and her Spotify artist page has over 1 MILLION streams and counting. Nashville, from the studio to the stage, is enjoying this fan favorite artist and this powerhouse vocalist and songwriter returns her love and talent when she takes the stage . . .

MOSES MO & THE R.C.B.
Creativity pours freely from every ounce of Gary “Moses Mo” Moore. Whether he’s igniting scorching hot riffs from his appropriately red guitar with Mother’s Finest, working in the studio producing his own unique brand of rock or sharing the international stage with fellow musicians, Carl Carlton & the Songdogs, Joan Jett & The Blackhearts, Tesla, Styx and others, Mo (as he is affectionately known by both friends and fans) quite simply loves to create and his fans love that.

Moore said, “there were only two choices for me: go work in one of the many factories located in the area or play in a band. I chose (to) play in a band.” It was in the clubs of Atlanta, GA in the early seventies, that he and his fellow band mates honed a sound that would help dub the city “Hotlanta”. Mo & band are coming off a recent selection by ROCK 100.5FM as one of Atlanta’s elite rock-groove entertainers which landed them on Verizon’s Amphitheater stage to open the Pop-Rocks event.

“What I bring to the stage or studio is the RHYTHM; it's the only thing that matters to me. It has always been about the rhythm”. Mo has always been a favorite with crowds. It’s quite obvious his ensembles are equally at home on the spot lit stages of the world.

CURE MY ENEMY
This group’s compelling energy and sound comes from a place of deep groove and hints at raw spirituality rooted in the contemplative Blue Ridge Mountains of Virginia and the sidewalk currents of Atlanta, Georgia where the band now calls home. Thick head-bobbing drums command the movement. Original unique uses of guitar and bass underlie emotion expressing personal experiences. The vocals wrap the music up in an outpour of soulful melody. CME’s songs bring a real sense of awareness for who we are as people existing in the world. Groove; passion; faith; love is felt immediately when you hear this band. Especially live. They just hit you perfectly with this City Groove and Rural Grit.

BLUE YONDER
Based out of Montgomery, AL Blue Yonder has carved one of the most distinctive musical identities in the capital city, combining Americana, folk, Ameripolitan, and parlor in a way that’s both haunting and exhilarating, capturing the mood of what critic Greil Marcus once called “that old, weird America.” Blue Yonder will be performing June 14 with Patrick & the Swayzees at 5 Paces Inn, Atlanta GA & in Birmingham AL, June 6 at The Nick Rocks before coming to let loose in Braselton GA.

J KYLE REYNOLDS
Kyle is a Georgia native from Loganville, Ga., who found music to be totally captivating and he gravitated to it from an early age. He’s performed for many local projects including, Last Word (2007), A Forced to be Reckoned (2007-2010), Nine (2010 - 2013), Project Grayscale (2013-2015) and is currently pursuing a solo career as a Country music artist. His southern drawl mixed with a bluesy groove comes together to create a soulfully Southern punch. He released his single, When You Smile, in May of 2015 and discovered new audiences. This single aired on 94.9FM The Bull in Atlanta for thirteen weeks and held rank at number one for three weeks. 94.9FM’s show, Backyard Country, features J Kyle Reynolds. His EP, If I Got You, was released in summer of 2016 and you can hear his latest release, Bud Light Sippin’, on Spotify and other sources.

WENDLO
This vocal and songwriting duo, Jacob and Chelsea Hamilton, met in 2011, when Jacob moved to Chelsea's hometown of Anchorage, Alaska. They soon found they shared a passion for music and started performing together. Jacob proposed to Chelsea in October 2015 at their first official show at the outdoor patio of Boulder Creek Coffee in Buford, Georgia. The music they played that night became the inspiration and the playlist for the eponymously-named EP, Engagement Party. Their song arrangements, storytelling and vocal prowess make them a force of music genius just the two of them, but newly added sound of their full band adds next level beautiful accompaniment to Wendlo’s already self-assertive sound.

CARRIE BOWEN BAND
Carrie, Monroe, Georgia born and raised, developed a love for music early and her songwriting clearly identifies her passion for community and faith. This accomplished vocalist and songwriting keeps great company. It’s evident when you hear her band of talented players and collaborators. The use of powerful yet delicate instrumentation accompaniment to lift and add melodic counter to Carrie’s natural ability to write pleasing melodic vocal hooks captivate her audiences. Carrie's heart is for her music to restore hope to the hopeless. Her release, Yes I Am, gives insight to what drives Carrie's passion for songwriting and performance.

TYLER GOFORTH BAND
Tyler Goforth is a singer/songwriter born in Decatur, GA. His Debut EP released in February 2017, is a mix of folk and alternative rock. His award winning song, Forty Miles to Macon, documents his trip to visit loved ones at their final resting place in Macon, Georgia. Tyler is a finalist of several songwriting competition events happening throughout Atlanta’s original music scene – most recently performing in the Finale of The Vista Room ATL’s Best of Original Series. You can see Tyler next on June 15 in Duluth GA at Red Clay Music Foundry presented by Eddie Owen. 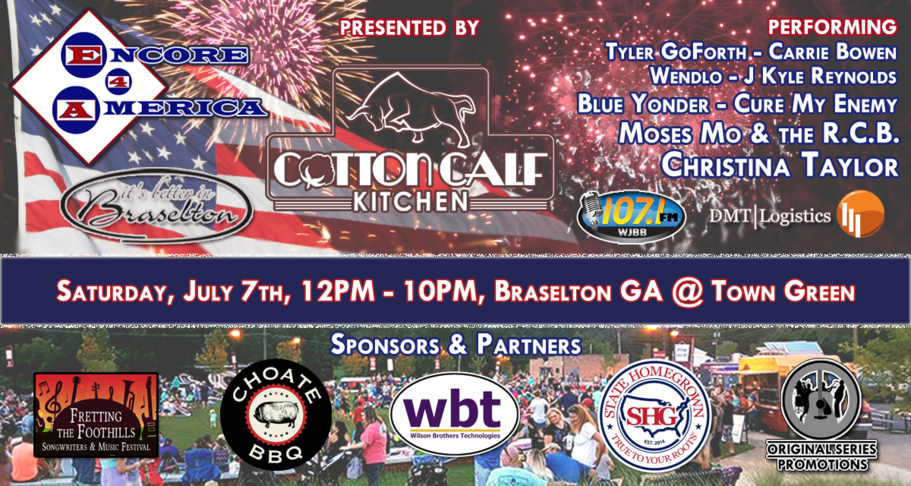 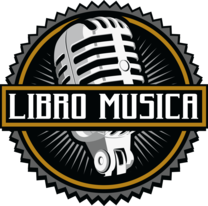 Saturday, July 7th, the town of Braselton, GA will be hosting this premier outdoor concert event to celebrate and honor America! Wilson Brothers music stage will feature GA local artists and headliners. Concert begins at 12PM and ends at 10PM. This event will make available some of the finest local gourmet food and beverage vendors, a kids PlayZone and is picnic/cooler friendly. Don't miss this day of celebration, music performance and business networking. Special Contest* Our VIP Table Reservation ticket holders are automatically eligible to compete in our "Most Patriotic Table Decoration" contest. Winning table design will be selected by event judges and winner will receive a $100.00 Visa gift card. All event tickets (paid & free) enter ticket holders in free raffle prize give-away for $100.00 gift card to Cotton Calf Kitchen. Cotton Calf is a proud sponsor of Encore 4 America.

This is a free event for general seating.Reserved seating  (under canopy)  tickets are limited and available: https://www.freshtix.com/events/encore-4-america

​Reformation Brewery  welcomes you to enjoy their products and set beer free!